MUST SEE IN A HURRY! Go to ACTTHEATRE.ORG for HOLD THESE TRUTHS tickets!

If you see this post and it is still August 1st, 2nd or 3rd, stop reading this and go get your tickets to this beautiful piece of theater, Hold These Truths, right now. I'll wait.

This powerful 90 minute solo performance is everything that makes theater unique, important, amazing. Actor-turned-playwright Jeanne Sakata was so moved by her subject that she became a writer to tell the story. She does a masterful job, with the help of consummate theater practitioners director Lisa Rothe and actor Joel de la Fuente.

It is a unique opportunity to experience this production in Gordon Hirabayashi's home neighborhood which makes it even more powerful, I would think, than anywhere else. "Opening night" included dozens of Gordon's family members in the audience, which made it that much more amazing to be in the room.

Gordon Hirabayashi was a Seattle native who refused to relocate to an internment camp and refused, again, to be drafted in the Armed Services because it meant signing a pledge that he would not swear allegiance to the Japanese Emperor. Though he was not a lawyer, and not even that great a student (by this account), somehow he figured out what few Japanese-Americans seemed ready to agitate for: the internment was anti-Constitutional and so was asking only Japanese-American potential soldiers to sign a loyalty pledge.

“Clue” on a Grand Scale! The Schmee's "Attack of the Killer Murder...of Death!"

Attack of the Killer Murder … of Death
Written by Wayne Rawley
Theater Schmeater
Through August 16, 2014

There is a ton to like about Theater Schmeater’s opening show in its spankin’ new space. Wayne Rawley’s Attack of the Killer Murder…of Death! is generally funny, though not hysterical every moment. What it is, though, is a great opportunity to hear spot-on dialogue from uniquely specific characters who break out of stereotype to become their own special beings.

Every single member of this large cast pulls his/her weight in solid, fully realized characters. There is so much going on on this stage that it can be hard to focus on the dialogue fully, and you do want to try to do that, because the dialogue is so smart and well-crafted. Like in real life, though, the characters don’t just stop and wait for others to speak; they are constantly interacting with each other, sometimes in hysterical ways.

The basic plot is a bunch of people on an island making a B-movie (or who knows how far down the alphabet you might go on this one). It’s a horror movie, but there are horrors when filming stops. The power keeps going out, props won’t work and then the leading diva does her death scene for the movie…and doesn’t get up!

“Seminar” at Theatre9/12 warns you “Never take a writing class!”

Theresa Rebeck’s play, Seminar, now being presented by Theatre9/12, seems like a two hour exhortation to never take a writing seminar! You’ll meet people who are either uninteresting or socially awkward or competitive or all three. At least, the initial impression of the writers in her play, all of whom have found $5,000 in New York dollars to attend a select writing seminar, points to those personality traits.
Continue reading »
Posted by Miryam Gordon at 7/25/2014 02:59:00 PM No comments:
Email ThisBlogThis!Share to TwitterShare to FacebookShare to Pinterest
Labels: satire, Seminar, Theatre9/12, Theresa Rebeck, writing seminar

Who killed “Jane Eyre the Musical”? Major Underscore in the Drawing Room with a Piano

The rather unfortunate musical, Jane Eyre, is being presented by Taproot Theatre, currently. It is a rare misfire for the company, though I can understand reasons why this company would really like the content (in a moment). An able cast still cannot succeed in making this musical more than palatable, unless your particular enjoyments include dour, unpleasant and almost hopeless circumstances.

If you know the Charlotte Bronte book, the basic story is included, though it experiences more like the greatest moments hits than an adaptation that works to include the feeling and scope of the novel. This is not inventive writing. In fact, it misses from the very beginning scene.

Jane comes out as an adult to begin telling us about her very unfortunate and difficult childhood. Here is a major opportunity to show us that she ultimately triumphs in the end (this should not be a spoiler). Here a song could be that says something like, “I thought it was hopeless, I had no reason to believe that a good life lay before me, yet here I am today to tell you that, but for the grace of God, I am happy and …” etc. Instead, the unidentified-aged Jane immediately plunges us into her childhood starting with a rousing song of, “Beat the liar out of that nine year old.”
Continue reading »
Posted by Miryam Gordon at 7/22/2014 12:38:00 AM No comments:
Email ThisBlogThis!Share to TwitterShare to FacebookShare to Pinterest
Labels: Jane Eyre the Musical, melodrama, Taproot Theatre

Summer Reading: “The Greenlake Play Series” (by and for people who visit Greenlake) 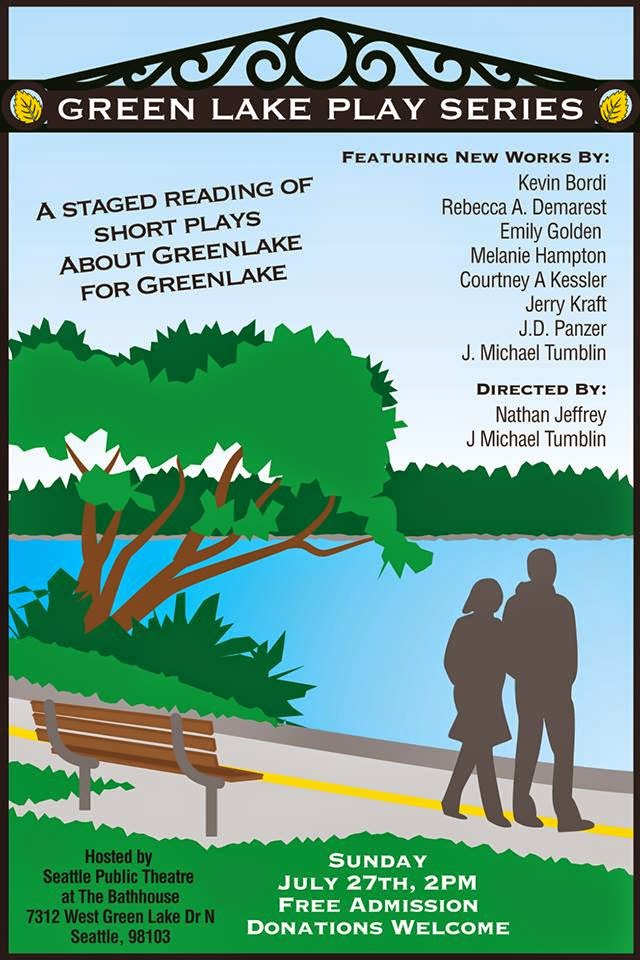 A group of eight playwrights have crafted a themed short-play event and are presenting is as a free reading at the Bathhouse, Sunday July 27th at 2pm. The shorts have all been generated with settings at Greenlake and at least one idea came from making a story out of bits overheard from people running past.

The eight plays are:
Spider in the Mouth by Kevin Bordi
Glamour Shot by Rebecca Demarest
Open Water by Emily Golden
Blood Brothers by Melanie Hampton
The Diagnosis by Courtney Kessler
The Path by Jerry Kraft
Puppy Love by J.D. Panzer
Buckets by J. Michael Tumblin

The new Zinzanni show is electric!

There is something electric going on at Teatro Zinzanni. Their new show, When Sparks Fly, is fun and fresh. It is definitely going to give a lift to those who have been to the amazing spiegeltent before. In fact, it’s magic!

The theme feels a bit like fusion from Rocky Horror Picture Show and Franken-lite. The Master (Voronin) conjures up a love for himself while the rest of his ensemble find love themselves. But first, as you get seated, The Accordion Player (Sergey Krutikov) serenades you, sometimes with violinist Tom Dziekonski. They make beautiful music together, and the sound is sent through the p.a. system, so you can sit anywhere in the tent and hear them.

Of course, anyone who has never gone to any of their shows will find themselves amazed and delighted. I’ve hoped that returnees could find just as good a time, going for fourth or fifth times. This iteration does have more of a surprising and delightful feel to it. Part of that is the inclusion of illusions that are definitely top-notch skull scratchers.
Continue reading »
Posted by Miryam Gordon at 7/11/2014 04:04:00 PM No comments:
Email ThisBlogThis!Share to TwitterShare to FacebookShare to Pinterest
Labels: dinner and a show, electricity, magic, Teatro Zinzanni

"We Will Rock You" to Sleep Occasionally

The musical revue, We Will Rock You, now at the 5th Avenue Theatre, is supposed to use the iconic songs from Queen to bring a story to life. Throwing all the kitsch and hackneyed jokes into a story in the (near?) future where because all of life is lived on the internet there is no more live music (wtf?), a Dreamer finds himself seeing visions of gates and a Rock hanging in the air, and his very existence threatens the entire accomplishment of the domination of GlobalSoft, the ruling corporation.

Would it surprise you to find that the gates are to Graceland? The King is Elvis? The Rock hanging in the air is really "Rock and roll" ... a vision? And all of the Bohemians who want Rhapsody find their way there from following a vee-dee-oh-tap-ee?

There are moments that are actually funny, but most of them try so very hard that they fail. Efforts to inject even more topical references (twerking is supposed to be funny?) hit so hard on the funny bone, they hurt. The book of this musical is terrible. Flat out terrible.

Continue reading »
Posted by Miryam Gordon at 7/09/2014 01:53:00 PM No comments:
Email ThisBlogThis!Share to TwitterShare to FacebookShare to Pinterest
Labels: 5th Avenue Theatre, Queen, rock musical, We Will Rock You

Victor Janusz is combining two of his favorite things: music and acting. He’s developed a memoir, Hands Solo: Pianoman, for the stage that performs from July 10-20 at ACT Theatre. He is one of the hardest working men around town, performing as a cabaret act and a solo pianist at Salty’s On Alki, among other gigs.

The roughly 80 minute show will give you a chronological look at his life through music that means something deep and particular to each age. Victor explains, “I want people to realize that the guy or gal behind the piano is investing his or her lifetime of relationships and stories into each song played.”

Some of the song selections and stories sound hilarious. The press release says, “Wonder about his surreal nine-year stint at Nordstrom playing for mannequins ("Mannequin Blues"); And revel in the tale of his 'command-performance' for then-Presidential Candidate Obama ("Living In A Blue State ") – where he exchanges business cards with the future President and causes a nervous breakdown among his Secret Service detail.” Others focus on his difficulties accepting himself as a gay man.
Continue reading »
Posted by Miryam Gordon at 7/07/2014 03:53:00 PM No comments:
Email ThisBlogThis!Share to TwitterShare to FacebookShare to Pinterest

Time for the Seattle Outdoor Theater Festival! Indulge in all things outdoors and a lotta Shakespeare, July 12 and 13!

Full calendar at that site.

"Kav and Clay" is a special event! It's a five-hour event and that shouldn't stop you for a minute!

One of the most amazing aspects of the history of comic books is who the major creators of this quintessential “American” art form turn out to be: New York-based Jews! Similar to the confounding aspect of American musical theater, replete with Jews and gays or Jewish gays, comic books were mainly conceived of and developed by Jewish men. Did they inject something into the water there?

Michael Chabon wrote The Amazing Adventures of Kavalier and Clay,  a sprawling history of two fictional cousins, Joe Kavalier, a Polish escapee from Nazi occupation in 1939, who comes to stay with Sammy Clay (nee Clayman), a comic book lover who aspires to emulate Superman’s creators success. It turns out Joe can really draw, and Sammy can really create great stories, in a match made in buddy-story-heaven.

Turning his far-ranging book into a Book-It style production was gutsy and overwhelming. Deciding to give it a four hour run time was almost inexplicable. Would audiences accept an epic evening of theater that includes two intermissions and a meal break? The answer is, “YES!” Virtually all the reviews and word of mouth, so far, have been positive and encouraging.
Continue reading »
Posted by Miryam Gordon at 7/02/2014 11:06:00 PM No comments:
Email ThisBlogThis!Share to TwitterShare to FacebookShare to Pinterest
Labels: 1939, Book-It Repertory Theatre, comics, fictional account, Jeff Schwager, Michael Chabon, Nazi threat
Newer Posts Older Posts Home
Subscribe to: Posts (Atom)