Shatteringly good - "The Pride" by Theatre22

A shattering emotional catharsis awaits audience members who attend The Pride, now being staged by Theatre22 at 12th Avenue Arts! Every SGN reader should make plans to see this production, if you can. It’s exceptionally well-acted, intelligently well-written, and is a great reminder of how far society has changed in a fairly short period of years regarding Gay life and issues.

It’s almost criminal that this play is Alexi Kaye Campbell’s first play, since it is so well-written. Perhaps more of his plays will be produced here in the near future, so we can experience the growth of his writing.

In The Pride, we meet Philip (Andre Nelson), Sylvia (Angela DiMarco) and Oliver (Trevor Young Marston) in two time periods: 1958 and 2008. But no, they don’t “age” – they are two different sets of characters with two different sets of concerns. In 1958, Philip and Sylvia are married and Oliver is a writer that Sylvia works with. In 2008, the three are all very contemporary friends.
Continue reading »
Posted by Miryam Gordon at 10/31/2016 06:54:00 PM No comments:
Email ThisBlogThis!Share to TwitterShare to FacebookShare to Pinterest

Music elevates this sleek production of "Medea" even more

A taut, sleek and musicalized version of Medea is on tap by Seattle Shakespeare Company. The normally unmusical drama includes original compositions by Shenandoah Davis that are aptly provided and allow a Greek Chorus to actually sing! This aspect elevates this well done production even more.

Ritualistically directed by Kelly Kitchens, the play runs about an hour and forty minutes straight through as the Euripides’ story of Medea unfolds on a spare, modern bedroom suite set by Andrea Bryn Bush. The translation used, by Kenneth McLeish and Frederick Raphael, feels contemporary and because of that feeling, it both helps the audience understand the words well, yet hurts the understanding of an ancient story.

Certainly, the language feels immediate and accessible, and with contemporary costuming by Chelsea Cook, it feels like it could be a story that happens today. But part of what we need to understand about Medea is that she is a woman “of her time.” Euripides wrote more than two thousand years ago about a woman treated as worthless when her husband decides to throw her over for a princess and a crown.
Continue reading »
Posted by Miryam Gordon at 10/25/2016 10:52:00 PM No comments:
Email ThisBlogThis!Share to TwitterShare to FacebookShare to Pinterest

SWC has clearly fallen head over heels for new artistic director Paul Caldwell. By the looks of things, he’s fallen in love with them, too! The love fest is on full display at St. Mark’s Cathedral on Capitol Hill during Seattle Women’s Chorus’ concert, Unveiled.

The audience is falling in love, too, because the program is fresh and inviting and focuses on the core function of a concert: choral singing. There are a few soloists, and they are all fantastic, but by and large, the whole chorus sings every song except for those done by “pocket choir” Sensible Shoes.
Continue reading »
Posted by Miryam Gordon at 10/25/2016 05:17:00 PM No comments:
Email ThisBlogThis!Share to TwitterShare to FacebookShare to Pinterest

Karen Hartman is a local playwright also gaining national recognition. Her newest play, Roz and Ray, is getting a co-world premiere production between the Seattle Repertory Theatre and Victory Gardens Theater in Chicago. The artistic director of Victory Gardens, Chay Yew, supplely directs this production and two veteran actors with national theater credits take on the roles in this roiling, emotional two-hander.

The unassuming title gives nothing away about what kind of relationship Roz and Ray have. It is definitely unique, in that Roz is a hematologist and Ray is a parent of twin hemophiliacs who need constant medical attention and blood products to stay alive. The play jumps back and forward in time from the late 1970s to 1991. This is key to the subject at hand.

We’re talking about AIDS. It’s a potent topic, not significantly explored in plays, though not unknown for including Gay life and AIDS’ affect on that culture, as many or most SGN readers can attest to. But most of us don’t know and can stand some education about how AIDS affected people who needed blood product to live normal lives.
Continue reading »
Posted by Miryam Gordon at 10/20/2016 04:12:00 PM No comments:
Email ThisBlogThis!Share to TwitterShare to FacebookShare to Pinterest

Taproot asks: Is God a game?

Somehow, in the late 20th century through 2016, there has appeared a religious test in our political societal vetting. Particularly for Republicans, often one must be devoutly Christian and loudly and visibly so. It may be that Trump is disrupting this idea, since he seems to barely know his Two Corinthians from his Thou Shalt Nots.

However, it’s enough of a “thing” that playwright Suzanne Bradbeer has crafted a play, set in the most present present, where a Senator is pressed to call upon Jesus and visibly display his faith during an election process.

The God Game displays the trenchant options in the political set, especially on the national stage. Here, Tom (played by David Drummond) is a senator from Virginia, well thought of and highly approved of, who is tapped to be vetted for a vice presidential running mate option. The presidential candidate is a controversial one, sounding similar to the disruptive Trump, but smart enough to want to have a diversity of opinions on his team.
Continue reading »
Posted by Miryam Gordon at 10/17/2016 03:51:00 PM No comments:
Email ThisBlogThis!Share to TwitterShare to FacebookShare to Pinterest

Village Theatre has a feel-good show for you to hoot and holler with and enjoy their kick-ass cast of seven. For Pump Boys and Dinettes, director Brandon Ivie assembled a bunch of mostly-local actor/singer/musicians to pluck and strum their hearts out in a fun outing of this feels-like-a-country-concert musical.

There really isn’t a story here, except for some background information about the small town these characters inhabit, their auto repair shop and the local coffee shop. There’s a bit of attempting to make some romantic coupling happen, but it’s not consummated.

The main reason to go is because these performers all work so very hard to please and to bring home the honky-tonky music. Led by Joshua Carter of the aw-shucks boy-next-door looks, Village also brings now-actual Nashville song-writer Sylvie Davidson home to Seattle to perform. The other big import is Levi Kreis and his magic piano-hands.
Continue reading »
Posted by Miryam Gordon at 10/13/2016 06:09:00 PM No comments:
Email ThisBlogThis!Share to TwitterShare to FacebookShare to Pinterest

The sun shines on this "Raisin" (at Seattle Rep)

A Raisin in the Sun
Seattle Repertory Theatre
Through October 30, 2016

The production of A Raisin in the Sun at Seattle Repertory Theatre is a fabulous opportunity to see this classic play on stage, and it appears that a good number of regional theaters are realizing that, almost 60 years later, it still represents a huge chunk of the African-American struggle in this country.

When you realize that Lorraine Hansberry only wrote two major plays before she died in her mid-thirties, and how powerful the play is in succeeding the tests of time, it is even more distressing that we lost her voice so soon. While Hansberry certainly wasn’t the first black woman playwright, and Alice Childress (for one) was contemporaneously writing, she was the first to have a play on Broadway. Apparently, that’s all that our theater community often paid attention to.
Continue reading »
Posted by Miryam Gordon at 10/12/2016 09:25:00 PM No comments:
Email ThisBlogThis!Share to TwitterShare to FacebookShare to Pinterest

Daisey on Trump - Go see it if you can 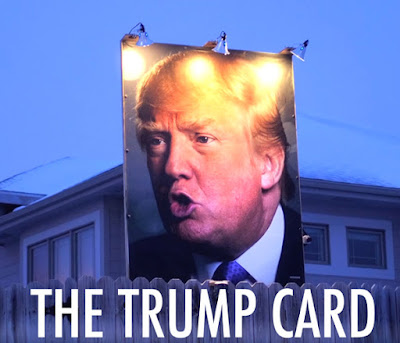 The Trump Card by Mike Daisey

If you find yourself in a city where Mike Daisey can tell you the story of Trump (in The Trump Card), please try to go hear it! Especially in the waning days of this horrid campaign, and Daisey’s clear ability to amend his script, there may be much to ponder.

Mike Daisey tells us stories about ourselves. Sometimes we don’t recognize ourselves and sometimes we might not like the story. This is what he was counting on in telling us about Trump and what Trump’s candidacy means about American society, today.

In The Trump Card, Mike lauds “competency” and, most of the time, we probably do, too. But Mike lauds Donald Trump’s competency and says that Trump is good at his job, which is as an entertainer. Trump is great at getting and keeping attention, must like any entertainer.
Continue reading »
Posted by Miryam Gordon at 10/12/2016 02:08:00 PM No comments:
Email ThisBlogThis!Share to TwitterShare to FacebookShare to Pinterest

Halleluyah - we find out "Handel's Messiah" was a scandal

Nowadays, “Handel’s Messiah” is the kind of phrase that no one thinks twice about, especially at Christmas time. It’s a piece of choral singing that you might even take for granted. But at one point in time, back when Georg Handel wrote the piece, it was actually a scandal that almost ruined his composing career!

The back story can be seen on stage at Taproot Theatre, as researched and created by Tim Slover, and produced with a wonderful cast, directed by Scott Nolte. It begins about 1741-3, as Handel’s career seems to be going into the toilet. His oratorios are said to be boring and people are not flocking to his current compositions.

Played masterfully by Jim Gall, we see him deep in debt and at the mercy of King George II (Frank Lawler), who may or may not decide to pay his bills. King George has a Catholic bishop whispering hard-line religious doctrine into his ear. Bishop Henry Egerton (William Kumma) is already against Handel’s earlier works based on the Bible, because they were written with an apostate, librettist Charles Jennens (Kevin Pitman) and performed outside a church. Horrors!
Continue reading »
Posted by Miryam Gordon at 10/07/2016 05:04:00 PM No comments:
Email ThisBlogThis!Share to TwitterShare to FacebookShare to Pinterest

October Theater Openings for your pleasure

October productions are fraught with big emotion. Catharsis awaits along with mystery and suspense. See what October has to offer. Note world premiere plays by locals Karen Hartman and Courtney Meaker are on tap.

Man of La Mancha, 5th Avenue Theatre, 10/7-30/16
Local performer turned Aladdin’s Broadway Iago, Don Darryl Rivera, returns to perform in a multi-ethnic production of this classic musical. Inspired by one of the greatest novels in Western literature, Man of La Mancha enters the mind and world of the mad knight Don Quixote as he pursues his quest for the impossible dream. In a tale told by Author Cervantes himself, Quixote is against all odds, a man who sees good and innocence in a world filled with darkness and despair.
www.5thavenue.org
Continue reading »
Posted by Miryam Gordon at 10/06/2016 12:30:00 PM No comments:
Email ThisBlogThis!Share to TwitterShare to FacebookShare to Pinterest
Newer Posts Older Posts Home
Subscribe to: Posts (Atom)