Theater Writers are an integral part of the communal "whole" 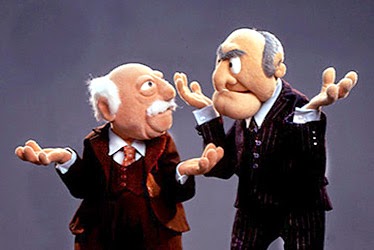 And we understand our connection to the community of theater, because we see our words about your product co-opted into your advertising and touted by you as "worth" something — that is when you want to use what we have said that is good about your artistic creation. Though, you're not so eager when we say some things didn't work so well or even failed in their intent.

Personally, I want to feel connected to and a part of this community, and this is the only way I currently have to do that, by writing about it. I, like almost everyone I know who writes about theater, fell into this almost by accident. There is no degree in theater criticism any more, if there might have been in some murky East Coast past....

In fact, my first piece was something I wrote after being filled with emotional response to something I saw that moved and affected me so much that I had to write about it. And then I tried to find someone who would publish it. It came out of how much I wanted to say something about a work that affected me so deeply.

When I began writing about theater, I went through a lot of phases of trying to understand what I should write and how I should write about it. In fact, the first hurdle was to try to get over the "Who am I to be telling people my opinion?" That is a huge issue, full of difficulty for one with self-esteem issues. Why did my opinion matter? Well, it didn't really, but I had someone who wanted me to write about theater and apparently liked what I wrote when he read it.

So, that was part of the answer, "Because I 'get' to." Someone wants my writing to put in his publication and so I get to do it. At that point, it may not have had much to do with how well I do that function, but in some ways, I was the right person at the right place and time to fall into it.

What made me want to was due to the fact that I did have a degree in theater and had spent much of my life doing as much theater as I could cram into my life from around age 12, when I was able to make autonomous decisions about how I wanted to spend my time. I wasn't just anyone with a publisher, I was someone who understands theater, theatricality, and what it takes to put on a show.

I am a booster. I want more people to see theater and fall in love with it. If I can entice someone to see a show by writing about it, that is an amazing opportunity. I don't really know if I accomplish that, because I have no way of knowing if anyone, much less a non-theater-goer, is reading my work.

Also, theater is expensive, even if few of the artists involved actually get paid, unfortunately. So, there are people who do want to go, and do choose to put their money toward live performance, yet they want to find out where they might best enjoy spending their money. They are the people the publisher wants to give content to, so they read about shows and see the advertising put right next to it. So, part of my job is to give some information to those who want a taste of a production in order to evaluate it with other information to decide where to get the best bang for their buck.

Sometimes that will be because I tell them how good a production is. Sometimes it will be because they have read my opinions and found out that they violently disagree with them, so they will not go to anything I like and in fact will go to everything they think I dislike! And I'm happy about that, too! Because at least I give them a point of reference, even if they think my opinion sucks.

I don't like doing this kind of writing. It's hard work for me to evaluate what I think of a production, in all its various aspects, and try to spit it out in reasonable English. I also worry about sounding the same from one article to the next, as if I have some formula to churn out this writing.

I often walk out of productions where I'm not even sure what I just experienced. I have to think about many of them and don't even know, right away, what I think. Some people who write seem to know what they think right away and be very clear about many specifics, and very confident about expressing them. That's not me, at least half, if not much more of the time.

I also have to be aware of my preferences and limitations. If a production is more experiential and 'performance art'-like, how do I talk about it appropriately? If it's not my cup of tea, because I like more linear storytelling, how do I make that clear, while still giving people who love nonlinear storytelling a bit of information that is helpful?

I'd much rather interview someone and ask a bunch of questions and talk. But I also know that theater companies, while they appreciate preview articles to get the word out, also want to be able to have that dispassionate eye and to quote some nice words from someone that says they've done a good job. In fact, producers crave this. It's not enough to do the work, someone must also praise it! And then the producer can say someone praised it.

You can't just praise your own production, can you? It's not enough to have a Facebook page full of audience member quotes, either. You know that you need someone with the title "reviewer" to say things, and for the public to feel like that "reviewer" is someone who knows enough about theater to evaluate it for them. Maybe to help them understand what they have just seen, even.

Then there is the issue of all these blogger people...who don't get paid to write things. Anyone can set up a blog and say they are a reviewer these days. If a theater lets 'em sit down, they've bought into the idea that the blogger supposedly knows something about the topic. I'd love to say that it's always the case, but you know it's not.

But what I can say is that there are more than a couple of handfuls of people who do not make money from reviewing, publish on the internet, and do it with grace, conscientiousness, knowledge, and passion. Many of them have gone in and out of rocky financial situations while doing so, and continue to write about theater for love.

It is the way I get to assuage my hunger for theater. It is the work I do to "earn" the seat. I feel total kinship with all the unpaid actors who bust their butts on stage for love. We are the same.

When I was a tweenager, theater was where I found my friends. When I was in high school and college, it was my community. I don't feel any differently in terms of a desire to be with, hang around, and make friends with the people in the theater community, now. Except for feeling like that community wants me to be separate and away from them because I write about them.

They are "uncomfortable" I'm told. What if they say something and it gets written about? I don't even understand that, because I have never written a word that anyone has said to me without permission and clearance.

I do understand, contrary to the impression you might have now, that some actors feel awkward around someone who is to write about what they just did, right after they've done it. Actors are often humans who developed a talent for displaying emotions on stage because they channeled insecurity into pretending to be someone else. Acting makes people vulnerable and therefore insecure.

Some actors I have met are secure in what they do and even immediately after they've just done it. They are able to be friendly with me and know that my passion makes me appreciate their work, and they don't have to feel afraid of me. I don't think I'm very menacing and it pains me to think someone would feel afraid of me or my opinion.

Whether I've explained this too discursively or not, I just want to make the case that those of us who write "about" theater must be considered an integral part of the whole. I'm not a peeping Tom or a voyeur. I have a job to do and it has value to the community. I wish you wouldn't make me feel like you were trying to shut me out.

Posted by Miryam Gordon at 6/06/2014 03:51:00 AM
Email ThisBlogThis!Share to TwitterShare to FacebookShare to Pinterest
Labels: community, connection, passion, theater writers

This is a moderated comment section. Any comment can be deleted if the moderator feels that basic civility standards are not being met. Disagreements, however, if respectfully stated, are certainly welcome. Just keep the discussion intelligent and relatively kind.